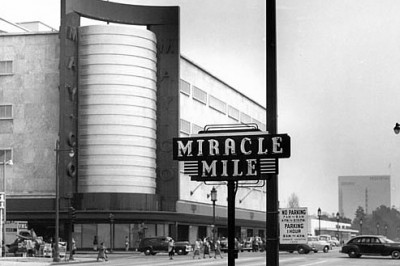 In the early 1920s, Wilshire Boulevard west of Western Avenue was an unpaved farm road, extending through dairy farms and bean fields. Later it was integrated into the Pacific Electric Railroad System–a large network of trolley cars known as Red Cars. This transit system included a Wilshire Boulevard line through the post-WWII era. Parallel lines ran on Santa Monica Boulevard, Olympic Boulevard, and San Vicente Boulevard. They were connected by north-south lines on Fairfax and Highland Avenues.

Developer A. W. Ross’s insight was that the form and scale of his Wilshire strip should attract and serve automobile traffic rather than pedestrian shoppers. He applied this design both to the street itself and to the buildings lining it. Ross gave Wilshire various “firsts,” including dedicated left-turn lanes and the first timed traffic lights in the United States; he also required merchants to provide automobile parking lots, all to aid traffic flow. Major retailers such as Desmonds, Silverwood’s, May Co., Coulter’s, Mullen & Bluett, Myer Siegel, and Seibu eventually spread across Wilshire Boulevard from Fairfax to La Brea. Ross ordered that all building facades along Wilshire be engineered so as to be best seen through a windshield. This meant larger, bolder, simpler signage; longer buildings in a larger scale, oriented toward the boulevard; and architectural ornament and massing perceptible at 30 MPH (50 km/h) instead of at walking speed. These simplified building forms were driven by practical requirements but contributed to the stylistic language of Art Deco and Streamline Moderne.

Nearby are the Farmers’ Market, The Grove shopping area, Museum Row, the Peterson Museum.